This spread aims at exploring a situation beyond what the eye can see. It sheds new light on what the Querent knows (what they see, what is shown to them) on the one hand, and on what is hidden from them (what they are not aware of) on the other hand. 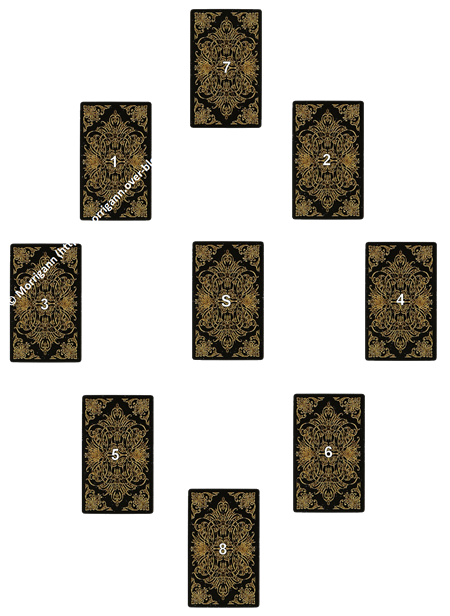 Interpretation
The Significator (S): the Center of the Mirror. Being the Center of the Mirror, this card represents the situation, the reason why the Querent ask their question. It can thus show the elements that trigger the Querent’s questioning the oracle. It can be either a reflection of the situation as it is or of the way the Querent sees it. If the question is about a person and their intentions, this card symbolizes them.

Card 1: the Mask. What is shown to the Querent. The way things look, what the Querent sees.

Card 2: Behind the Mask. What lies hidden, voluntarily or not. Things the Querent does not see, what they ignore.

Card 3: the Tree. The way the Querent sees the situation (or the person). Their perception. This card may reveal a small problem the Querent is aware of.

Card 4: the Forest. What the Querent is about to discover, an aspect which is yet unknown and hidden by the Tree.

Card 5: the Path. What the Querent expects, the logical evolution of things according to what is known to the Querent when they question the oracle.

Card 6: the Surprise. What the Querent does not expect. This card is about an event or a person the Querent will meet on the path. This shows something that (or someone who) will play a crucial role in the situation, helping the Querent or obstructing their way.

Card 7: the Star. What the Querent wishes, what they would like to come true.

Card 8: the Anchor. What brings the Querent down to earth, back to reality. What they need to know, the truth. This truth may be about the potentials contained in the situation or about the intentions of the person if the question is about someone).

Further remarks
The structure of this layout is defined by several horizontal and vertical axes. The horizontal axes respectively show cards 1 and 2 (the Mask), 3 and 4 (the Tree and the Forest) and 5 and 6 (the Path and the Surprise). Through them, a linear reading of the different aspects of the situation under scrutiny is performed. There also three vertical axes. They comprise cards 1, 3 and 5; 7, 5 and 8, as well as 2, 4 and 6. The axis 1, 3 and 5 shows what is visible, what the situation (or person) looks like. Here are the elements that are submitted to the mirror’s evaluation. Once they pass through the mirror, these items become axis 2, 4 and 6, which reveals the hidden aspects of the situation/person and what remains hidden to the Querent’s eyes. The central axis does not go “through the looking-glass” in the same manner as Alice does in the novel, but from top to bottom, passing through the Significator. This indicates what influences weigh on the situation. These are due to the Querent themselves: the Star shows what they wish for whereas the Anchor brings them back down to earth (reality).

The different positions were named so the cards placed on the horizontal axes echo each other and show complementarity. Therefore, the two sides of the Mask are considered, then the Tree with the Forest that is hidden and remains unseen behind it, and at last the Path unfolding before the Querent, with its lot of unforeseen events. The central axis is built in the same way, with the Star and the Anchor helping the Querent in finding the right balance regarding the situation. In addition, these two cards synthetically picture things as they really are.

The Royal Court: the most influent people in the Querent's life

An introduction to the Royal Court in "Madame Endora's Fortune Cards".

A brief introduction to the series of articles about "Madame Endora's Fortune Cards".