The witch is definitely a part of the Halloween folklore. That's why it seemed quite logical and natural to me to dedicate a special spread to this emblematic figure. The following layout is the first of a series specifically designed for Samhain.

Traditionally, witches ride their brooms on the night of a sabbat and fly towards the place where the celebrations take place. By doing so, they go from one state to another insofar as the sabbat is connected to a rite of passage since it marks an important step on the Wheel of the Year. This is all the more true about Samhain, for this festival is the door to the new year.

The spread – broom-shaped! – is called "The Witch's Flight" and explores the notion of passing from one state to another and of evolution. It is perfect for the new year in order to have an overview (past and present) and foresee what lies ahead. It allows close examination of a situation in which the querent is emotionally or spiritually involved so that the implications and consequences of the decisions that are made or the changes that are taking place around the querent can be fully measured. This spread can thus be used with or without a question.

How to proceed
After the deck has been shuffled and cut, draw ten cards and lay them as follows: 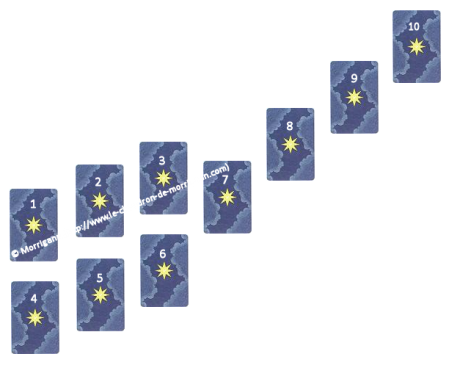 Interpretation
Visually, this spread is divided into two main parts: cards 1 to 6 are the straw of the broom while cards 7 to 10 are its stick.

This structure can be divided again into several smaller parts, which are distinct but complementary and based on the three-card spread.

Cards 1 to 3 show what we leave behind, what we are going away from, what we turn our back on.

Cards 4 to 6 show what pushes the querent forward, their deep motivations.

As the connection between the straw and the stick of the broom, card 7 is the convergence of what we leave behind, what pushes us forward and what lies ahead (which is indicated by the last three cards). This card puts into light the way these three axes are connected.

Cards 8 to 10 represent what lies ahead for the querent, where they are headed, strong of their past experiences and of what has already been revealed in the spread.

Further remark
Each of the three axes is composed of three cards. Individually, the cards have no particular meaning defined according to their respective positions. The different groups are rather read as full entities and the cards they contain are deciphered as if they were telling a story for they describe a logical sequence of events or states of mind that the querent has been through.

Which decks to use?
This spread fits any tarot or oracle deck. However, considering the special event it is related to, some decks will be more attuned to the season and to the kind of explorations allowed by this spread than others.

Among tarot decks, you may of course use the classical Marseille, Rider-Waite Smith or Crowley, but you may also like the “Halloween Tarot” (no kidding!) or Joseph Vargo's "Gothic Tarot", or any deck close to this kind of atmosphere.

Concerning oracle decks, “Oracle of the Shapeshifters” is just perfect since just like this spread, it explores changes and transformations. “Oracle of Shadows & Light” and "Wild Wisdom of the Faery Oracle" are very pleasant too, as well as “Madame Endora's Fortune Cards”.