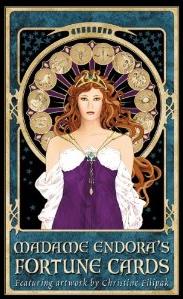 Packaging
The deck comes in a cardboard box, with a little white book. Since this item is published by a small structure in the United States, the little white book does not include any translations into other languages than English.

The cards
The structure of the deck
There are 48 cards, divided into five groups:

- The Royal Court (8 cards): characters embodying the people who have a strong or direct impact on the Querent’s life. They can also be incarnations of the main forces that influence the reading.

- The Realm of Fable (10 cards) shows creatures belonging to several mythologies, folklores and ancient traditions. They represent forces that are independent from the Querent, things on which they have no grasp and that have a strong impact on their fate.

- The Bestiary also has 10 cards. It holds (or releases!) creatures about which many popular stories, legends and superstitions have spread throughout the years. They embody the “primary” instincts of the human being, its qualities and faults/flaws, of which the Querent will need to learn in order to improve their condition.

- The Treasury has 12 cards. Each one of them pictures a wondrous object. Those “mystical treasures” either help the Querent or get into their way to prevent them from reaching their goal.

- The Elements (8 Cards) give precisions about the energies that prevail in the spread. They are the celestial bodies and forces of nature influencing and guiding the Querent and everything they undertake.

Roots and aesthetics
As can be seen through its structure, this oracle deck is deeply rooted in mythologies, folklores and esoteric concepts that belong to various traditions. Indeed, elements from Ancient Egypt, Celtic, medieval, classical, pagan traditions, as well as Qabalah, fairies and universal symbols can be found side by side here. All these items from different horizons could lead to a sort of inconsistency in the deck, considering the great difficulty implied by the gathering of so many cultures which (apparently) do not have much to do with each other. However, everything works fine as a whole and the various references to cultures that seem so different the ones from the others speak for themselves during the readings.

Indeed, taking into account the origin of the symbols depicted on the cards enables the reader to avoid a certain number of misunderstandings. For instance, in oracle decks like the Belline (very popular in France), the cat is considered as a trickster and a figure of evil. It embodies treason, lies, a deceiver, a hypocrite, etc. This concept comes directly from the Middle Ages, a time when the cat – especially black ones – was associated with the Devil and thought to be the perfect familiar for “witches”. Being able to move slyly, it was an ideal spy for the witch who wanted to know what was brewing here and there. Due to this bad reputation, many black cats were thrown from the top of belfries and towers because people thought they were the Devil. Even nowadays, some people still have such prejudices about them. As a matter of fact, the cat had quite another reputation in Ancient Egypt where it was sacred and considered as an embodiment of the gods on earth. This particular aspect was chosen by the artist in the “Madame Endora’s Fortune Cards”, for the black cat sits upright, facing the reader, just like Bastet in common representations. It does not hold any good or bad news, but rather announces that the Querent’s luck is going to change.

In the same way, the elements, symbols and archetypes that illustrate the different notions depicted in the cards were picked by the authors in the cultural system that seemed the most appropriate to them. This gives the deck a very particular depth, for choosing the best elements in several traditions requires a thorough knowledge of the ideas and concepts they imply. The Greenman thus embodies the forces of nature while the Golem refers to someone who acts on the Querent’s behalf.

At this point, one thing has to be admitted: if one could have expected some inconsistency due to the many influences that can be found in this deck, the impact of all these traditions is in fact quite the opposite. Indeed, the messages delivered during the readings are all the more precise and deep.

The many cultures represented in this deck also reflect the many faces of the world. Just like a tarot deck, an oracle deck is designed to show the structure of the world and the forces that rule it. This is exactly what can be found here, through the objects/characters/concepts/forces that are depicted, as well as through their origins. This universality thus appears on several levels: that of the immutable forces that the world is made of, and the cultures and periods that influenced what it is today, which is an aspect usually rarely dealt with. This reflects the humane level with everything it holds. This means that in this deck are shown both the sacred/divine plane, which is untouched by time, and the earthly/human plane, where changes are possible in accordance with the will or the qualities of the human being.

Visually, the cards are simply magnificent! The black background enhances the element depicted on the card, adding a touch of mystery to this deck. The general rather dark tone gives the reader the impression of getting in touch with realms unknown and sacred. Each illustration was carefully made, and contains no unnecessary detail, which makes the reading more intuitive, for each symbol has a definite purpose.

Despite the involvement of many different cultures alluded to earlier, the style adopted by the artists shows a general unity and consistency. During a reading, the eye thus remains undisturbed when cards with Egyptian and medieval motifs come up in a same spread. This is a very good point, for there is nothing worse than attempting to read cards with a deck that has no visual consistency whatsoever!

Last but not least, human qualities (“good” or “bad”) are depicted as coats of arms, as if they were representations of ourselves that we carry as flags as we walk the path of life. This makes readings even easier.

The little white book
A thirty-page booklet comes in with the cards. It is divided into two main parts. In the first one explanations about the general structure of the deck and about the meaning of the cards can be found. The second part displays six different spreads, all very interesting.

Though they are presented in very few words, the meanings of the cards allow the reader to go deeper into the analysis and to be more specific about the interpretation of the captions situated at the foot of each card. Needless to say, explaining all the meanings of the cards in a five-line paragraph is simply impossible, but the explanations given in the booklet are very fine starting-points. Enlarging this fan by conducting complementary research about each card is then up to the reader.

The spreads presented in the little white book are in tune with the general atmosphere of the deck. They are quite original compared to what can usually be found in booklets, not giving cross or Celtic cross models but spreads created specifically for those cards. Very interestingly, the spreads exposed here rather concern self-exploration than the classical “answering a question”. Answering a question or exploring a situation with “Madame Endora’s Fortune Cards” is indeed possible, but the main concern of this deck remains – in my opinion – self- and spiritual exploration.

Though certain spreads – such as “the Seer’s Fan” – allow health and material issues more space, the readings are rather oriented towards emotions, the forces surrounding the Querent and spirituality. Asking the cards about health and material issues remains among the many possibilities, but the main meanings of the cards will then need to be transposed and adapted from what can be seen in the card, read in the booklet and learnt from personal research and knowledge.

I just love the spreads included in the booklet, for they are in direct line with the mythical, mystical, esoteric, poetical and dreamlike tone of the cards. However, if they are set in poetical terms, the messages delivered by this deck remain strong and very honest. This oracle deck is as beautiful and honest as Fairies are beautiful and terrible.

Uses of the deck
Just like any other tarot or oracle deck, the “Madame Endora’s Fortune Cards” can be used in many different ways: answering specific questions, exploring a particular area in the Querent’s life, looking at the forces that influence their situation, etc. However, I think that this deck is especially appropriate for inner and emotional issues. To my mind, this deck is a very good mirror of what makes the World and the human being. As a way of consequence, it is the perfect tool for exploring the relationships between the one and the other.

One must also take into account that even if the booklet contains very interesting suggestions to help the reader using this deck, its limited length does not allow it to show all the possibilities. It is thus up to each reader to build their own ways and relationship with the deck!

Remarks
Because of the “dark” tone of the illustrations, this deck is very likely to trigger some reluctance from some people. However, the messages delivered by the cards are quite luminous.

I love reading with this deck, for I find it appeasing and pleasant, as if I were in good company with a friend. Indeed, just like with any other deck, there are some cards which I do not like to see in my readings, but those too are necessary! With some practice, I realized that those “bad” cards were not so bad after all, because even though they look “negative” at first sight, they always contain something “positive” to restore the balance. In fact, seeing beyond their “frightening” aspect enables to seize the deep meaning of the messages they have to deliver.

Where can this deck be bought?
To this day, I have never seen this deck in any shop in France, either on the Internet or in a “real” shop. If you want to buy this deck, you will need to go to www.amazon.com to directly to Monolith Graphics.