Despite what we might think, Litha is here and we are currently going through the longest days of the year. Also called Summer Solstice, Litha will occur on June 21st, celebrating the moment when the creative and regenerating Sun Force will reach its zenith on the Wheel of the Year. Litha is traditionally the perfect time to draw this life force and use it to nourish new projects or to practice magick, for all undertakings thus benefit from the power of this flow of energy.

There is no better time in the year than this one to test our own strengths and the forces that are working within ourselves: those which we use everyday, but also those which are still germinating deep within and which will grow and help us in what we undertake. In the same way, "charging" one's projects and initiatives with this energy will surely help!

Hommage to Cernunnos
This year's special Litha spread has been designed to put into light the forces and energies that can be found within the Querent at the time of the sabbat. As you will see, several degrees are taken into account according to the stage of development of each kind of energy. I thought that a spread shaped as a stag's head would be particularly appropriate (cards 1, 2, 3 and 4 form the head while cards 5 to 10 are the antlers).

Litha being the sabbat which honors Cernunnos as the Horned God, I wanted the lay out to illustrate this, for he is the masculine half of the Sacred Energy which rules Nature. Indeed, this Supernatural Being is very often depicted as a majestic stag, or at least with stag antlers. That is why the king of the forest was, to my mind, the best image I could use to create a special spread in relation to Litha.

Purpose
Help the Querent to analyze the way forces are working within him at the summer solstice. Through the image of Cernunnos, he will thus see what the sabbat holds for him. No need for a question.

How to proceed
After shuffling and cutting the deck, draw ten cards and lay them out as follows: 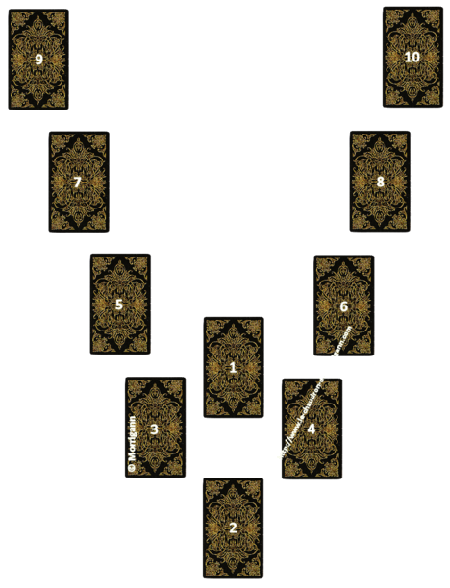 Interpretation
The spread is divided into two main parts where cards 1, 2, 3 and 4 are the head of the stag and are to be read first while cards 5 to 10 are the antlers.

Card 1 describes the Querent at the time the spread is used and thus at Midsummer.

Below is card 2, which show what lies beneath, what lies asleep within the Querent, what he is about to become.

Card 3 presents him with what makes him strong at the time of the sabbat while card 4 allows him to face the things that make him weak or to see what is weakening and waning within him.

Card 5 shows which force among those that lie in the Querent reaches its zenith at the solstice while card 6 hints at the one that is retiring, allowing it to grow.

Card 7 depicts a force already developed within the Querent but which needs to continue growing until next Litha. Card 8 is what will be "sacrificed", what will diminish little by little in order to allow it to grow.

Card 9 is a force yet sleeping within the Querent, just like a seed that was planted but is still in the ground as a young shoot. Present Litha will give it the energy it needs to "get out" and start growing and manifest. Card 10 is what this seed is about to replace.

Remark about the structure
Cards 1, 2, 3 and 4 are a variation on the simple cross spread. They set the frame of reference that describes the Querent at the time of the reading.

Cards 5 to 10 are the stag's antlers. In the World, each and every thing and force obeys the laws of balance... and this spread couldn't ignore them! As a consequence, connections between what is growing and what is declining are shown through the way these cards are read. Indeed, the first antler (cards 5, 7 and 9) shows the forces that are currently growing within the Querent while the second one (cards 6, 8 and 10) identifies what he will "lose" as a counterpart. The cards are thus read with a mirror effect.

Recommended decks for this spread
Because of its obvious connections with neo-pagan traditions, this spread was especially designed for "Madame Endora's Fortune Cards". However, any deck with a Neo-Pagan atmosphere is appropriate, just like for instance the beautiful Oracle of Shadows & Light and Oracle of the Shapeshifters or the wonderful "Wild Wisdom of the Faery Oracle" and other decks which will be reviewed here in the next few months.

Indeed, a tarot deck can also be used, but you will get better results if you make sure the one you choose reflects the spirit of the season and/or neo-pagan ideas and themes. Faery tarots are also great tools for this kind of spreads and will do wonders if you combine them with the summer solstice!

Merry and blessed Litha to you all!