For Samhain/Halloween, one of the traditions consists in making a lantern in a pumpkin – or any other cucurbit – in which a scary face and smile are carved. This tradition comes from the Irish legend of Stingy Jack, which tells how this character was denied the access to both Heaven and Hell after cheating the Devil several times. As a matter of fact, God did not want to welcome such a crook in Heaven while the Devil was still upset with Jack, who had been a better liar than him. The Devil thus condemned Jack to endlessly roam the Earth at night with a piece of burning charcoal as hi only guide. So he would not burn his hands, Jack placed the charcoal in a big turnip, which he had first hollowed out.

Since then, scary faces and grins are carved on hollowed out pumpkins or gourds at Samhain and a candle is placed within those to make lanterns in order to frighten away evil spirits like Stingy Jack and other in case one comes across them.

This spread was inspired by this tradition and presents the Querent with the "evil spirits" they might come across at this time of the year. They can be their own fears, but also painful memories and the "monsters", the "demons" that are buried deep inside of them. Just like in the legend, the lantern protects the Querent from all these. It then gives an overview of what awaits the Querent once the "monsters" are vanquished.

The spread
After shuffling and cutting the deck, draw six cards and lay them as follows: 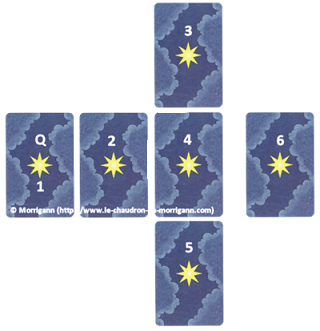 Interpetation
Card 1 shows the Querent as they are when the spread is done, that is to say during the night of Samhain. It represents how they are dealing with this very special time of the year.

Card 2 is the lantern. This object stands between the Querent and the roaming around monsters who could assail them during this special night. Just like the carved pumpkin does, this lantern protects the Querent from what is in front on them, that is to say his fears, old demons and painful memories which could crawl back to the surface and everything else that could bother them.

Cards 3, 4 and 5 depict what the Querent is protected from by the lantern. They are the monsters lurking in the dark, the Querent's fears, and what could assail them out of the blue. These cards are to be read separately (one after the other) when they describe several kinds of events or together if they show the evolution of the same situation. This is, of course, to be determined by the reader according to the cards that appear in the spread.

Card 6 is a sort of conclusion, an opening. It gives an overview of which path the Querent can take to keep on walking within the protection of the lantern's glow.

Remarks
I designed this spread for the "Salon Fantastique 2014" (the Fantastic Fair), where visitors could try it out and enjoy it for the first time.

This spread is highly recommended at Samhain, but it can also be very useful beyond this very special season. For example, it can be used in order to get an idea of one's own fears and of the way one can find a protection from them and even overcome them.

Recommended tools
This spread can be done either with a tarot or an oracle deck. The season – and the main theme – obviously invites the reader to use decks related to the very special Samhain/Halloween atmosphere. The "Halloween Tarot" by Karin Lee and Kipling West will just be perfect, as well as the gorgeous decks by Jasmine Becket-Griffith and Lucy Cavendish, like "Oracle of Shadows & Light", "Oracle of the Shapeshifters" and "Les Vampires"! Monica Knighton's "Tarot of the Dead" will also be a perfect choice, just like Joseph Vargo's "Gothic Tarot" or the "Halloween Oracle" (Blue Angel, 2014).

Any other deck will also do fine, as long as one likes the artwork and the way it presents the World. Considering the period, focusing on decks with an imagery related to fairy worlds and mythologies, especially if they develop a Celtic approach, is also very interesting.